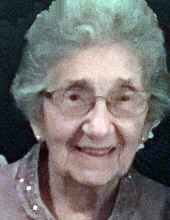 Funeral services for Mrs. Agnes Testa McGivern, 93, of Monroe, LA, will be held at 10:00AM Tuesday, March 17, 2020, at Jesus the Good Shepherd Catholic Church with Fr. Keith Garvin officiating. Interment will follow at Mulhearn Memorial Park Cemetery Mausoleum. Visitation will be held from 5:00PM until 7:00PM with a 6:00PM vigil wake Monday at Mulhearn Funeral Home, Sterlington Road, Monroe, LA.

On March 13,2020, Agnes Testa McGivern passed away peacefully at home with her family by her side. She was born in Waterproof, Louisiana on November 15, 1926, to Mr. and Mrs. Charles Thomas Testa. She graduated from Waterproof High School before attending what is now Northwestern State University, where she received her degree in elementary education. After graduation, she taught fourth grade in Morgan City, Louisiana, where she met her husband of almost 67 years, Richard “Dick” McGivern. Agnes was a member of Jesus the Good Shepherd Catholic Church. She was an avid bridge player and enjoyed being a member of the Bayou Desiard Country Club Women’s Golf Association. She played duplicate bridge, was a member of the Newcomers Couples Bridge Club, and enjoyed playing bridge twice a month with eight of her friends for 40 plus years. What she enjoyed most in life was spending time with her family.

The family wishes to extend their thanks to sitters and caregivers, Shelia Kelly, Marian Smith, Monica Weeks, and Cheniere Moore.