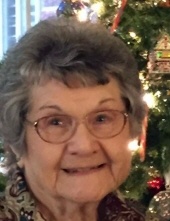 Ann Helen Hall Smith was born on September 8, 1928, to William and Pearl Hall in Friendship, Louisiana. She was the baby of eight siblings. Ann went to celebrate her 90th birthday with her LORD Jesus on September 8, 2018. She was preceded in death by her parents and all of her siblings and Jack L. Smith, her husband of 53 years.

Upon graduation from high school, Ann was awarded a scholarship to Centenary College and was accepted to the Cadet Nursing Corp, but she had to resign her appointment when she married her high school sweetheart, Jack Langdon Smith, on July 6, 1946. She gave birth to Ann LaJuane on January 17, 1953. During her early marriage she worked at several jobs as she was an excellent bookkeeper. She was also a very good bowler and was a member of the Texas State Champion women’s team in the 1960’s. She and Jack bought and developed Antique Acres Mobile Home Park on Winnsboro Road in Monroe and she operated it alone for the last 19 years following his death in 1999.

Ann loved her LORD and sang in a church choir most of her life. After cancer surgery in 1974 which removed half of her tongue, doctors told her she would likely never talk plainly again. The LORD had different plans, and when she promised to sing for Him as long as she was able, He miraculously healed her speech and she sang until the July 2018 summer break at First Baptist, West Monroe.
She loved to travel, to entertain family and to enjoy the residents who became friends in her mobile home park. Her life is a testimony of faith to all who knew her. We are comforted to know that she is now resting in her Savior’s arms.

Mrs. Smith’s Grandsons and Great grandsons will serve as pallbearers.

Visitation will be held from 5:00 P.M. until 7:00 P.M. on Sunday at Mulhearn Funeral Home West Monroe, LA.
To order memorial trees or send flowers to the family in memory of Ann Hall Smith, please visit our flower store.