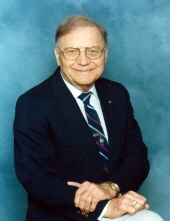 Funeral services for Arnold Lee Braddock, 93, are scheduled for Friday afternoon, March 8, 2019. Visitation is at 1:00 PM and services at 2:00 PM in the chapel of Mulhearn Funeral Home in Monroe, LA with Rev. Lynn Malone and Rev. Johnny Hankins officiating. Interment will follow at Mulhearn Memorial Park Cemetery.

Arnold died Monday, March 4th, after a recent decline in health. He was the oldest son of Robert Lee Braddock and Claudia Joyner Braddock of Caldwell Parish and Monroe.

After graduating from Grayson High School in 1942, Arnold enrolled at LSU but in 1943 was drafted into the U. S. Army where he served the Asiatic-Pacific areas of New Guinea, Philippine Islands and on to Japan after their surrender in 1945. After returning from World War II Arnold received his degree from LSU and soon entered the high point of his life, marrying his lifelong mate Edith, in 1952 in Georgetown, La. Arnold and Edith settled in Monroe where he established a successful insurance agency and received his Charter Life Underwriter (CLU). Arnold was affiliated with Lee National, Guaranty Income and Sentry Insurance Companies which became the source of income and protection for many families and individuals throughout North Louisiana.

Arnold was passionately devoted in service to his Creator, his family and others. For decades he was actively involved in support to others and the Nation through First United Methodist Church, American Legion and the Barak Shriners of Monroe.

The family extends thanks to the staffs at NE La. Veterans Home, Rosemont Assisted Living and Caring Hands Hospice.

Memorials should be directed to First United Methodist Church or Barak Shriners.