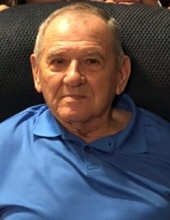 A Celebration of Life for Bobby Carl Houser, 75, of Sterlington, LA, will be held at a later date at North Church in Bastrop, LA.

Mr. Houser was born July 24, 1944, in New Orleans, LA, and passed away March 17, 2020 in Sterlington, LA. Mr. Houser was a founding member of North Church in Bastrop, LA. He was an active member of his church and loved serving the Lord. He served his country in the National Guard. He enjoyed watching drag racing and the New Orleans Saints. He loved spending time with his family and friends.

Mr. Houser was preceded in death by his father, William Houser; and mother, Konia Carroll Houser.

The family wishes to extend a special thanks to all of the loving caregivers that assisted the family in taking care of him during this time.

Memorials may be made to North Church Bastrop, Children’s Seating Fund, 358 Holt Street, Bastrop, LA 71280.
To order memorial trees or send flowers to the family in memory of Bobby Carl Houser, please visit our flower store.