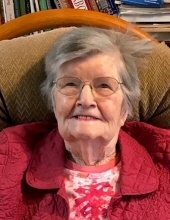 Graveside Services for Mrs. Bonitha McEacharn Bryan, 102, of Petal, MS, formerly of Winnsboro, LA, will be 11:00 AM Tuesday, January 18, 2022, at Reagan Cemetery in Baskin, LA. Arrangements are under the direction of Mulhearn Funeral Home, West Monroe, LA.

Mrs. Bryan was born July 21, 1919 and went to be with her Lord and Savior on January 14, 2022. She was of the Baptist faith. She married Earl Bryan in February of 1938. In her 40’s, she went to school to become a licensed practical nurse (LPN), a career that she enjoyed until she was 75 years old. Mrs. Bryan enjoyed traveling, sewing and gardening.

Memorials may be made to St. Jude Children’s Research Hospital.