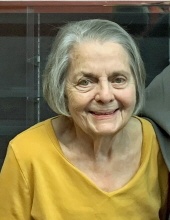 Born Charlotte Monette Latham in Curve, Tennessee, the daughter of sharecroppers Emma (né) Land and Jesse Latham. When she was still a child her family moved to Gretna and later to Monroe and a short time later on to West Monroe next to the Ouachita River, where her family took root and Charlotte loved to play as a child.

She graduated from West Monroe High School and earned her B.A. from Northeast Louisiana State College (now ULM). Charlotte married Jules C. Dante from Winnsboro in 1961; widowed 56 years later when Jules died of cancer. Retiring after over 30 years as a public school teacher in Art and Social Studies, she spent her early retirement pursuing her arts and maintaining her open and hospitable home. A true artist her whole life, Charlotte grew to excel in multiple media from pen and ink to oil paints and watercolor to scrimshaw and jewelry making.

Beloved wife to Jules and a fantastic mother to three boys; Jules E., Joseph D. and Jason M. as well as a daughter-in-law Marie (né) Robinson and honorary “common law” son Gerald Trahan who never failed to be there when she needed. The youngest of three children, Charlotte was preceded in death by her older brother Elton “Pappy” Latham and older sister Matille Latham Lindsey.

She is survived by much missed and forever loved by a large and extended family worldwide far too numerous to list here including sisters-in-law, nieces and nephews even generations removed. All who ever really knew Charlotte will never forget her. She lives in our hearts and memories.

We are honoring our Mom’s firm wish to not have a service.

In lieu of services, flowers or memorial, Charlotte requested donations to and support for our beleaguered Northeast Louisiana Food Bank.
To order memorial trees or send flowers to the family in memory of Charlotte Monette Latham Dante, please visit our flower store.