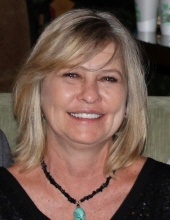 God saw you getting tired and a cure was not to be. So, He put his arms around you and whispered, "Come with me". With tearful eyes we watched you and saw you pass away, and although we loved you dearly, we could not make you stay. A golden heart stopped beating, a precious soul at rest. God broke our hearts to show us that He only takes the best.

A private family graveside service will be held at Hasley Cemetery on Saturday, April 25, 2020, for Danon Herrington Roberts, 67, of West Monroe, Louisiana.

A resident of north Louisiana for most of her adult life, Danon played an integral part in the founding of Peach Tree Dental in Ruston. She was a devout Christian and attended Christ Church in West Monroe. There is nothing Danon adored more than her four boys and it brought her great joy to prepare one of their favorite meals. She especially enjoyed making a mess in the kitchen if she was accompanied by her loving grandchildren.

She touched many lives and will be dearly missed by her family, friends, and all who loved her.