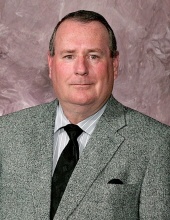 Funeral Services Celebrating the Life of Donald “Don” Stuart Wheelis, 66, of Eros, LA will be held at 10:00 A.M. Saturday, May 18, 2019 in the chapel of Mulhearn Funeral Home West Monroe, LA with Rev. Tim Mosher officiating. Interment will follow in the Hasley Cemetery in West Monroe, LA.

Don was born on December 28, 1952 in Monroe, LA and went to his heavenly home on May 15, 2019. He was a retired Major with the Ouachita Parish Sheriff’s Office. Don began his career with OPSO in 1983 as a correctional deputy at the Ouachita Correctional Center, and retired as Major at OCC in 2009 with a total of 22years with the department. He also served as a street deputy in Jackson Parish for two years prior to working with OPSO. Major Wheelis is remembered by those who knew and worked with him as a good friend and a loyal, dedicated deputy for the Ouachita Parish Sheriff’s Office.

Don was a passionate hunter of white tail deer. He loved sharing his fondness of hunting with his sons, daughters-in-law, and grandchildren. One of his greatest joys was to have a young grandchild in his lap when they shot their first deer. Also Don had a hobby of woodworking and was very talented in creating unique pieces of furniture from looking at a picture or sketch. He used his woodworking skills on mission trips to Bolivia, South Africa, Oklahoma, North Carolina, and Arkansas. After retirement, he spent many hours taking his only granddaughter to dance class. He also purchased a classic car and joined the Mid-South Regional Old Car Club, until the cancer would no longer allow him to actively participate. Don is preceded in death by his mother, Mavaline Wheelis and his brother, James Taylor.

Survivors include his ninety-one year old father, Huey Wheelis; his wife of 35 years, Peggy; two sons, Lee Wheelis (Jennifer), and Brandon Wheelis (Erica); brother, Benny Taylor (Annette); brothers-in-law, Wayne Rhymes (Sharon) and Denis Rhymes; sister-in-law, Joyce Wilson (David); favorite uncle, Bobby Wheelis (Sylvia) and numerous aunts, uncles, cousins, nieces, nephews; special friends he grew to love like sons and others like brothers (you know who you are). His five grandchildren stole his heart the day each was born, Brayden, Connor, Emma, Luke and Bryn. His legacy will remain in his sons and grandchildren whom he loved unconditionally.

The Honor Guard from the Ouachita Parish Sheriff’s Office will serve as Pallbearers.

The family would like to give a special Thank You to Dr. Barry Weinberger, and the chemo nurses and staff at Oncology Associates of Monroe for their compassionate care for the past three years. Also, Thanks to Jordan Hospice for making Don’s final days as comfortable as possible for him and the family.

In lieu of flowers, memorials may be made to The Gathering Church Building Fund, 207 Defreese Road West Monroe, LA 71291.