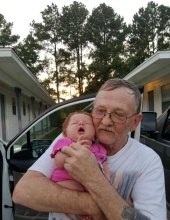 Donnie served in the United States Navy and was a Vietnam Veteran. In the later years of his life, he was a Truck Driver until his retirement. He had a great love for fishing and was an avid Fisherman. Donnie had a great interest in Bream fishing mainly, earning him the nickname “Bream” or “Bream Fish”, by family and friends.

He is preceded in death by his mother, Patsy Jean Jordan; sister, Desire Hall; and brother, Rocky Hall.

Private family memorial services will held at a later date.