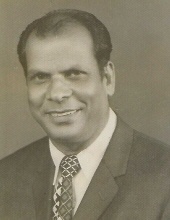 Funeral services for Centenarian Dr. M. J. John (Melathathil Johanan John) who went home to be with the Lord on September 9, 2018 will be held at 11.30 a.m., September 15, 2018, at the First Christian Church, 3400 Forsythe Ave, Monroe. LA. Graveside services will follow at the Mulhearn Memorial Park at 623 Highway 80 East, Monroe, LA. Visitation will be on Friday Sept. 14th, 2018 between 5-6pm at Mulhearn Funeral Home, 2308 Sterlington Rd, Monroe, LA.
Dr. M. J. John was born as the fifth child to Mrs. Annamma Chacko and Mr. Melathathil Kurian Johanan in Punnakadu, Kozencherry, Kerala, India on July 24 1918 and departed to his heavenly abode on September 9, 2018.
Dr. M. J. John, B.Sc.(Agri), M.A.(Economics), M.S.(Rural Sociology), Ph.D.(Rural Sociology, Higher Education) was Principal Emeritus of Voorhees College, Vellore; Former Principal and Director of Agricultural Institute, Katpadi and Former Director of Allahabad Agricultural Institute, India presently known as Sam Higginbotham University of Agriculture, Technology and Sciences. He headed three historical, leading, eminent educational and service Christian institutions in India and provided outstanding leadership to these institutions. The institutions that he headed in Vellore and Katpadi were connected with the Reformed Church of America and the American Arcot Mission. Dr. M. J. John, a pioneer in the field of Agriculture and Higher Education, has served and promoted the cause of Agriculture and Higher Education working with both the State and Central Governments and has rendered humanitarian services for the economically underprivileged people. He was a member of the consultative committee of the planning commission of India and a member of the scientific committee of the Indian council of Agricultural Research. Dr. M. J. John served the Church of South India, the Global Church, the Society and Public at Large. He was a delegate to the World Council of Churches second assembly at Evanston, Illinois, U.S.A. in 1954 and later had special assignments with the World Council of Churches and the National Council of Churches. He has been a distinguished scholar, very capable leader and administrator and has enriched the educational system of both India and the United States. He was a worldwide traveler and educator who is associated with people globally. Dr. John had his early education in Kerala and graduated from the C.M.S. High school in Kottayam in Kerala. Melathathil is the family name. Dr. M. J. John spent all of his active working life in the Katpadi - Vellore area of Tamil Nadu, serving the people and public of the Vellore Region, both rural and urban. He also spent some time at Allahabad, North India serving his Alma Mater. He has been both leader and member of several civic, charitable and philanthropic organizations such as the YMCA, Rotary International, Heifer Project International, Bible society of India and was the Founding member of Action for Food Production (AFPRO), Association of Voluntary Agencies in Rural Development (AVARD) and Farmer’s Forum of India, New Delhi; World Neighbors India Program etc. He is well known for his distinctive and clear voice; a warm handshake, pleasant smile, helping hands and unique leadership skills. It is said of Dr.M.J.John that his calling has been life long and not just a job or position and that his witness and his work have been a testimony of his faith. He is well respected and genuinely liked by many; having earned their respect by his hard work, dedication to work and excellence, sincerity, able leadership and integrity.

Dr. M. J. John was a Fulbright scholar to the US in 1953. He graduated from Allahabad Agricultural Institute and Iowa State University of Science and Technology with distinction and was on faculty at both these institutions. Dr. M. J. John was the first Indian Principal of Agricultural Institute, Katpadi (joining the institution in 1941 and serving as the Principal of that institution from 1956 to 1971) and later the Principal of Voorhees College, Vellore, Tamil Nadu from 1971 to 1978. Dr. M. J. John was very active and involved with both Madras and Vellore Dioceses of the Church of South India and held responsible positions in the Synod and Diocesan Councils. He was the Principal of Voorhees College when it was part of the University of Madras and was a member of the Senate and Academic Council of the University. Voorhees College became a Post Graduate institution under his leadership and was the first College in the Vellore area to offer Post Graduate courses. Imparting education and values to students and shaping their future by not just imparting education but also helping in character building to be good citizens, strong and good pillars of society was very important to Dr. M. J. John. After retiring from Voorhees College, Vellore in 1978. Dr. M. J. John was the Director of Allahabad Agricultural Institute Sam Higgin Botham Institute of Agriculture, Technology and Sciences from 1984 to 1986. In 1976 he was one of the six delegates invited from India by the World Food Conference, for the American Bicentennial hosted by Iowa State University and presented a paper on food and third world countries. In 1981 he went on a commission to the Church of Uganda in Kampala the Capital City, Africa as a consultant for developmental work on assignment from the World Council of Churches. He was a Visiting professor to Simpson College, Indianola, Iowa; Sterling College, Kansas and Iowa State University, his Alma Mater.

Dr. M. J. John was a resident of Monroe, Louisiana for the past 24 years. He was preceded in death by his parents, siblings Mr. M. J. Kurien, Mr. M.J. Mathew, Mrs. Annamma and Mrs. Mariamma and his beloved wife Dr. (Mrs.) Mary John, M.B.;B.S., D.G.O. He is survived by his daughters, Dr, R. Mollie A. John, M.D. and Dr. Sumna Kuruvilla, M.D. who have been practicing physicians in Monroe, Louisiana and his grand daughter Dr. Sarah M. Kuruvilla, M.D., several nephews, nieces, their children, and grandchildren, Melathathil John John, Jismol John, MaryAnn John and Johan M. John, friends as also thousands of students, and by the staff and students of Voorhees College, Vellore, Agricultural Institute, Katpadi and the People of Vellore, who have been an integral part of his life. His was faithful to God and God was faithful to him. He always acknowledged the grace of God in his life. His favorite Bible verse:
“But by the grace of God I am what I am: and his grace which was bestowed upon me was not in vain”.

His life and work are a testimony of his faith. He helped build the Chapel at Voorhees College and it has been subsequently named as Dr. M. J. John Centenary Chapel. As part of the Centenary Celebrations in 2018, his Birth Centenary Year, a Library was named as the Dr. M. J. John Centenary Library at the DeValois High School which he founded at Agricultural Institute, Katpadi; in honor of his excellent leadership of the institutions that he served and headed, all of which experienced tremendous developments, expansion and advancements during his leadership. A special Dr. M. J. John Oration was held at Madras Christian College and there is an endowed prize for the best outgoing student in Public Administration in the name of Dr. Mary and Dr. M. J. John and the first prize in this series was awarded in July 2018 as part of the Centenary initiative. Dr. M. J. John provided and arranged for scholarships for several needy and underprivileged students and worked for their advancement and also established several endowed prizes for students at Voorhees College, Vellore one of which is in his name. In lieu of flowers, donations may be made to the Dr. Mary and Dr. M. J. John Foundation (2701 Brierfield Drive, Monroe, LA 71201), which will be used for educational and charitable purposes.
Online Registry/Condolences: www.mulhearnfuneralhome.com
Mulhearn Funeral Home
Sterlington Road, Monroe, LA
To order memorial trees or send flowers to the family in memory of Dr. M. J. John, B.Sc.(Agri.), M.A., M.S., Ph.D. (Melathathil Johanan John), please visit our flower store.