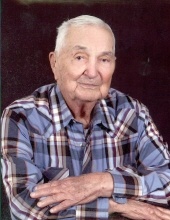 Earl was born on April 1, 1923 in Downsville, LA and passed away on September 20, 2019 in Eros, LA. He was one of the original founders of the Ouachita Riding Club. Earl was ranked as a Private in the United States Army and served as a truck driver in the European Theatre. He was stationed in Normandy, Northern France, Rhineland and Central Europe. Earl was a member of Clark Springs Baptist Church. He is preceded in death by his wife, Evelyn Louise Halley Farmer; mother, Mamie Lee Patterson Morris; father, Homer Farmer; stepfather, Bill Morris; and brothers, Harold Wayne Farmer and Donnie Farmer.

The family would like to extend their appreciation to Veronica Foster, Stacey Jones with Caring Hands Hospice, and Angela with St. Francis Hospital for the outstanding love and care they gave to our Dad.