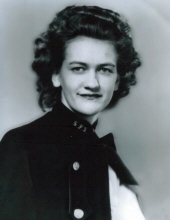 A Funeral Mass celebrating the life of Elizabeth (Betty) Pittman Soignier will be held at 10:00 AM Monday February 24, 2020 at the St. Matthew Catholic Church in Monroe Louisiana with Father Mark Franklin, Deacon Scott Brandle and Deacon Kenneth Soignier officiating. Interment will follow in St. Paschal Catholic Cemetery in West Monroe, LA, under the direction of Mulhearn Funeral Home.

Visitation will be from 9:00 AM Monday until Mass at the church.

Betty was born on October 5, 1929 in Gibsland, Louisiana to James Grayson Pittman and Bennie Mae Foster Pittman and passed away from a brief illness at her home on February 22, 2020 surrounded by family.

Her earliest memory was of her dad coming in from work and telling her mom that Bonnie and Clyde had been killed in May of 1934. Betty spent her childhood in Athens, Louisiana. She graduated from Athens High School in 1947 where she played basketball. Betty moved to Nazareth Hall at St Francis Medical Center in Monroe to go to nursing school.

A fellow classmate and future sister-in-law, Grace Reynolds Soignier introduced her to her boyfriend’s brother, Ray on March 29, 1948 with their first date being a movie night.
At a time when a nursing student could not be married, she chose to change her path in life by becoming a Catholic on April 16, 1949 (Holy Saturday) followed by marriage at 8am on Monday, April 18, 1949 at St Paschal Catholic Church, the first opportunity after Lent to be married.

Four children followed while being a homemaker living in Bosco Louisiana.

Betty enjoyed sewing and after the children were largely grown, made draperies for and with Una Hart who became a life-long friend. She and Ray moved to West Monroe in 1982 to cut his daily commute from forty-five minutes to five minutes but they maintained a camp house at Bosco where they would spend many weekends. Finally, she loved her many dogs that she had over the years and whatever dog was the current one, was always the favorite with her last one being Betsy.

The family thanks the many friends, neighbors, and family for the many meals, kind words, and prayers, as well as her priest, Father Mark Franklin, the staff of Louisiana Hospice Care, (Natalie Ward and Gale Palm), niece and Godchild Janice Soignier Segars and Heather Lewis who provided her with much love and support these last few weeks. Memorials can be made to St. Matthew Catholic Church, 121 Jackson Street, Monroe, Louisiana 71201, any animal rescue or animal shelter of your choice, or other charity of your choice.

Online Registry/Condolences:www.mulhearnfuneralhome.com
To order memorial trees or send flowers to the family in memory of Elizabeth "Betty" Soignier, please visit our flower store.