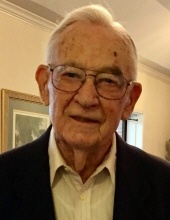 Ellis Auttonberry was welcomed into his new mansion in Heaven March 19, 2020. He was 99 years young. I’m sure the first words he heard from Jesus were “Well done, my good and faithful servant!”

Our dad was a loving, caring Christian man who touched so many lives while on this earth. He never missed an opportunity to engage with others. He grew up in West Carroll Parish, the son of farmers. He loved the earth and continued to grow tomatoes, figs, watermelon, cantaloupe, cucumbers and more until he was 98. He continued to recycle paper and plastic until his death, as he believed we have an obligation to help make the world and our community a better place.

He was saved at age 13. He and his dad were hoeing cotton and he told his dad he wanted to go to church. That night he walked the aisle and publicly professed Jesus as his Savior. Seven kids lined up behind him to be saved and they were baptized in Bayou Macon. His favorite scriptures were John 1, John 14: 1-4, and Psalms 23. He read his bible for hours everyday. Even up to a few days before he passed away. He was a Gideon and even in his nineties enjoyed taking bibles to the fifth graders.

He was the oldest of eight children and started working in the fields at age five, and he never stopped. His dad cut the handle of a hoe to fit him. At age twelve, he would carry the cotton to the gin in their horse-drawn wagon, leaving their home at midnight to get in the line early so he could get back home in time for school. He worked at Olin Kraft from 1951-1982. After retirement from there he continued to always work. He had a thriving AmsOil business, sold crafts at local festivals and was an independent contractor for several businesses. He was never idle. He truly believed every day was a good day and a gift from God.

He made sure his children had the opportunities he wasn’t able to have. He and mom gave us voice lessons, piano, flute, and saxophone lessons. They bought us the nicest instruments available. But, we weren’t spoiled. We were taught the value of a dollar and to “only buy what you need,” not everything you want.

Daddy was a very studious man. He loved learning new words and played a very competitive scrabble game every Friday night for ten years, up until a week before his passing. He graduated from NLU at age 45 with a degree in Business. He got his degree in eight years, while working full time at his job and working in his church, Ridge Avenue Baptist.

He was a WWII veteran. He served in the Navy in the Philippines from 1944-1946. He was a gunner’s mate in the 7th Fleet on a boat called “Lil Butch.” He loved to share stories from that time of his life.

Daddy was preceded in death by the love of his life, Fay Forbes Auttonberry. They were married for 73 years. Their son, Thomas Wayne Auttonberry. Also, his mom and dad, Andrew Jackson Auttonberry and Eula Mae Adams. His sisters, Lilly Mitchell and Beulah Martin. His brothers, L.C., Albert and Bill Auttonberry.

Due to the virus, there will be a family visitation and burial and hopefully a memorial at a later date. He loved sharing God’s word, so the Gideon’s would be an appropriate memorial, but you can make them to the organization of your choice.


Online Condolences/Registry:www.mulhearnfuneralhome.com
To order memorial trees or send flowers to the family in memory of Ellis Auttonberry, please visit our flower store.