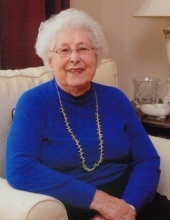 Eloise Helm Bailey, 98, of Mooresville, NC, passed away on Saturday, November 3, 2018, at Gordon Hospice House, Statesville. Born in Carson, LA, she was a daughter of the late Samuel and Leona Helm. Mrs. Bailey was a graduate of Georgia State College for Women. She was a retired music educator and vocal music teacher at Karr Junior High, New Orleans, LA, and started several choirs throughout her life. Mrs. Bailey loved chocolate and wine, needlepoint, playing bridge everywhere she lived. She had a kind sense of humor. Mrs. Bailey was an Elder in the Presbyterian Church, Regent of DAR in New Orleans, Aurora Garden Club, Merry Sherrys, Music Club, SADS and Ladies Auxiliary, member of the 1996 Centennial Olympic Team, served as activities director, residence and choir director at Chambrel in Roswell, GA, Vice President of Residence at Park at Piedmont Retirement Home and Resident of Churchill Independent Living.

Funeral services will be held at 2 PM, Monday, November 5, 2018, at Williamson’s Chapel United Methodist Church, Mooresville, with Rev. Mark Pitts officiating. Mrs. Bailey will lie in state at the church 30 minutes prior to the service.

A graveside service will be held at 11:00 AM, Friday, November 9, 2018, at Mulhearn Memorial Park Cemetery, Monroe, LA, under the direction of Mulhearn Funeral Home, Sterlington Road, Monroe.

In lieu of flowers, memorials may be made to Gordon Hospice House, 2341 Simonton Rd., Statesville, NC 28625.

Cavin-Cook Funeral Home, Mooresville, is serving the family of Mrs. Bailey. Condolences may be made to the Bailey family at www.cavin-cook.com.
To order memorial trees or send flowers to the family in memory of Eloise Helm Bailey, please visit our flower store.