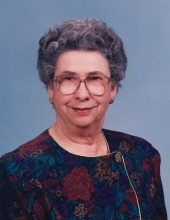 Funeral services for Eloise Lusk Sayre, 94, of Monroe, LA will be held at 10:00AM, Saturday, March 14, 2020, at Lakeshore Baptist Church with Rev. William Smith officiating. Interment will follow at Mulhearn Memorial Park Cemetery. Visitation will be 5:00PM until 7:00PM, Friday, March 13, 2020, at Mulhearn Funeral Home in Monroe.
Eloise Lusk Sayre passed away on Wednesday, March 11, 2020. She was born on March 1, 1926, in Gueydan, Louisiana to James Lee Lusk and Beatrice Campbell Lusk. She was preceded in death by her husband of 40 years, William S. “Simmie” Sayre, and brothers James Lusk and Raymond Lusk. She is survived by her son, Bill Sayre and wife Debbie, daughter Susan King and husband Jeff, and daughter Diane Madison and husband Jamie. In addition, she is survived by grandchildren Will Gaston and wife Natalie, Amanda Money and husband Nathan, James Sayre, Katie Sayre and husband Andrew McCormick, Rebecca Sayre, Nathan Madison, and Megan Madison, and great-grandchildren Brenna Money and Hayden Gaston.
She was a graduate of Louisiana Polytechnic Institute, now Louisiana Tech University, with a Bachelor of Science degree. She later trained and worked as a medical technologist. She and Simmie met while working together in the laboratory at St. Francis Hospital. She later worked at Monroe Medical Lab and E. A. Conway Hospital. In an age where few women worked outside the home, Eloise was devoted to her career.
Eloise was a lifelong Christian. She was born and raised in the Methodist Church and later became a Baptist. She and Simmie were charter members of St. Mark’s Methodist Church and she was a longtime member of Lakeshore Baptist Church where she served as a Sunday School teacher for many years.
Eloise was a longtime member of the Order of the Eastern Star, where she made many lifelong friends.
Growing up in the Great Depression and having lost her father at an early age, Eloise and her family moved from place to place as work was available. She lived in Dubach, LA, Epps, LA, Rosepine, LA, St. Francisville, LA, Lafayette, LA, Hanford, WA, San Pedro, CA, , and finally Monroe. Having moved all her life, she told Simmie when they were married that she wanted to stay in one place, and she did. She was fortunate to enjoy good health and live independently until just the last few years.
The family would like to express appreciation to the staff at both Ouachita Healthcare and St. Francis Hospital for the care she received in her final years and days.
Pallbearers will be Jamie Madison, James Sayre, William Gaston, Jeff King, Nathan Madison and Randall Cooper.
Memorials may be made to Lakeshore Baptist Church.
Online Registry/Condolences: www.mulhearnfuneralhome.com
Mulhearn Funeral Home
Sterlington Road, Monroe, LA
To order memorial trees or send flowers to the family in memory of Eloise Lusk Sayre, please visit our flower store.