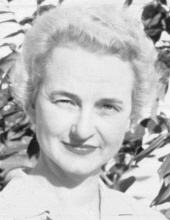 “It has repeatedly been said that no Tech dance is quite complete without the presence of Emmogene Maroney. Grace and beauty personified, Em, the sweetheart of Tech, has won a place in the hearts of all who know her.” --Who’s Who at Louisiana Tech, 1940.

Emmogene Maroney Levert, age 97, passed away peacefully in Atlanta, Georgia, on January 19, 2019. She lived up to the billing in that college yearbook. Throughout her life she bestowed her charm and grace on everyone she encountered, dear friends and strangers alike, and made them feel as though they were the most important person in the world.
She was born in 1921 in the village of Oakland, Louisiana, and grew up in nearby Marion. She went to college at Louisiana Tech where she met the love of her life, George W. (Pete) Levert. Emmogene was very popular and selected as a leader and for various honors at the school. She was President of the Alpha Chi Chapter of Kappa Delta, a member of the Student Senate, Dream Girl of Pi Kappa Alpha fraternity, Vice President of her Sophomore class, a Maid on the Mardi Gras Court, and a maid on the State Fair Court.

She married Pete in 1941 and traveled with him after he was commissioned as a Naval Officer. He was sent to the South Pacific and returned to her at the War’s end. They settled in Monroe, Louisiana, for their life and raised two children and participated in all the social, community and faith-based activities typical of the 1950’s and 1960’s. She continued her involvement with Kappa Delta as an alumnus and was active in the Junior League and at Our Lady of Fatima Parish.

She was preceded in death by her husband, George W. Levert, Sr. and her sister, Nell Maroney Dickson and her husband, William Lipscomb Dickson. She is survived by her son, George W. Levert, Jr. of Atlanta, Georgia and his wife, Dale Carter Levert, and her daughter, Jean Levert Pappas of Rogers, Arkansas and her husband, Dr. John J. Pappas. Other survivors include four grandchildren, William Francis Levert, Michael Wheeler Levert, James John Pappas, and Emily Elizabeth Pappas. She is also survived by two great-grandchildren, Leda Carter Levert and Kathryn Dale Levert.