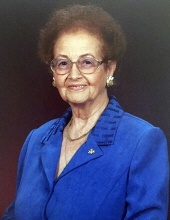 Mrs. Milford was born on May 24, 1918 and passed away on May 18, 2018. Ettie loved large. As a charter member of Highland Baptist Church, it was during the “Meet and Greet” time that she would disappear from her seat for hugs and sweet fellowship, only to be the very last one back to the pew. For 98 years she enjoyed this routine until she moved to Austin, TX in March of 2017. At the Assisted Living Facility, she continued this by moving around the community there, “visiting the elderly” and giving out hugs.

Her joy came outside in her garden and cooking in her kitchen, mainly for others. In her later weeks, one of her social workers asked what brought her joy, she answered, “work always has.” She and her first husband, Marion Perkins, owned a grill in the mid-sixties near First Baptist Church Bossier City, LA, where they were members. She cooked and made pies until cancer took him at a very young age. Mrs. Milford then moved back to West Monroe and started working at Highland Elementary School in the cafeteria (back when the outside community could actually buy lunch and come for a visit). She stayed there until her retirement. Mrs. Milford truly enjoyed being a part of her community. She showed such love through her cooking. Her pride was her garden, vegetables and flowers that she tended to up until 2010.

Visitation will be held from 10:00 A.M. until Service Time on Thursday at Highland Baptist Church West Monroe, LA.

The family is thankful for all of her family and friends in West Monroe that surrounded her with love.