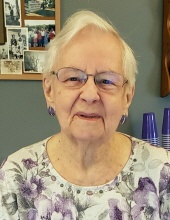 Hazel Ann Doehr, 100; formerly of rural Spencer, Wisconsin, passed away on March 12, 2022 in Monroe, Louisiana where she had lived for the past 6 years.

A service will be held on Saturday, April 9, 2022, at 11:00 A.M. at Christ Lutheran Church in Chili, Wisconsin where she was a lifelong member. Visitation will be from 10:00 A.M. until the time of the service. Burial will take place at Yolo Cemetery at a later date.

Hazel Ann Beil Doehr was born at Chili, Wisconsin on March 26, 1921, daughter of Adolph and Laura (Schlinsog) Beil. She attended Forestside elementary school near Chili and graduated from Neillsville High School in 1939. She was baptized and confirmed at

Christ Lutheran Church in Chili. On December 18, 1941, she married Lyle Doehr and they operated a dairy farm for the next 40 years where she was an integral partner of the operation. Lyle passed away Jan 11, 2013. They were married for 71 years.

She and Lyle traveled all during their life together, spending time in Alaska, Hawaii, Taiwan, and many of the states.

She was a devoted wife, mother, grandmother, great grandmother and great-great grandmother, hosting scores of family gatherings and faithfully staying in touch with her scattered family and a myriad of friends. She loved talking on the phone and sending cards and letters to innumerable people. She never sat idle, always reading her Bible, writing letters, embroidering, or doing word finds.

In 2008 she and Lyle moved from their farm to rural Marshfield to live with her daughter, Lou Ann and son-in-law, Russel and in 2015 she moved with them to Monroe, Louisiana.

She was preceded in death by her parents; her husband; her siblings, Hilda (Harold) Montag, Esther (Gerald) Dankemyer and Arwin Beil; sister & brother-in-law, Evelyn (Lucien) Mohr; three nieces, Lora, Joyce and Linda and many friends.

In lieu of flowers, memorials are being accepted by Hazel's family to be donated to Geneva Academy.

To order memorial trees or send flowers to the family in memory of Hazel Ann Doehr, please visit our flower store.