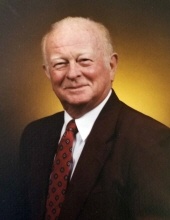 Herb was born September 24, 1931 and went to his Heavenly Home September 3, 2019.
He was born to C.R. ”Pete” and Leona Peterson. Herb grew up in Monroe, graduated from Neville High School and received a band scholarship to Northeast Junior College, that soon became Northeast Louisiana College. He joined the R.O.T.C. and upon graduation was commissioned in the US Army as a Second Lieutenant. He attended Officer Basic at FT Benning, GA, then was assigned to FT Riley, KS, where he was accepted into flight training. He served as a pilot in Germany before returning home to begin his teaching career. Herb was a band director in the Ouachita Parish School System, where he blessed generations with his love of music.

Herb was a family man who cherished every moment with them. He was kindhearted, witty and most of all, loved unconditionally. Herb served in the ministry for 69 years as Church Music Director for Fair Park Baptist Church, and then Trinity Baptist Church and Cedar Crest Baptist Church, then felt his Lord call him back to Fair Park. After retiring as Music Director, he became the Minister to Senior Adults. His love for all his Church Family was well known. Fair Park recently bestowed the honor of Minister Emeritus for his faithful service. He loved visiting and caring for everyone while constantly sharing his love of Jesus with those he came in contact with.

Herb was preceded in death by his parents, C.R. Peterson and Leona Hardwick Peterson and brother, Reese Peterson.

Heartfelt thanks to Louisiana Hospice for their wonderful care and encouragement to Herb and his family.

Memorials can be made to Fair Park Baptist Church.