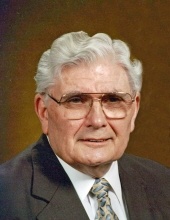 Funeral services celebrating the life of Mr. Howard Louis Coy, Sr., 91, of West Monroe, LA will be held at 3:00 P.M. Saturday February 24, 2018, at Ridge Avenue Baptist Church in West Monroe, LA, with Dr. Jim Wolf and Dr. Jerry Edmondson officiating. Interment will be in Roselawn Memorial Gardens in Calhoun, under the direction of Mulhearn Funeral Home in West Monroe, LA

Mr. Coy died February 21, 2018, at Glenwood Regional Medical Center. He was a member of the Ridge Avenue Baptist Church, where he served as Deacon Emeritus, was a member of the Tuesday Men’s Prayer Group and served as Adult Sunday School Director. Mr. Coy retired from Louisiana Power and Light.

He is preceded in death by his parents, John and Hester Coy; and by his siblings, Robert Coy, Edgar Ray Coy, Edna Mae Pace, and Joan Ann Coy.

Memorials may be made to the Louisiana Baptist Children’s Home.
To order memorial trees in memory of Howard Louis Coy, Sr., please visit our tree store.