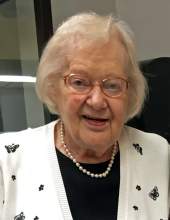 Janet was born in Columbus, Ohio on June 17, 1934. While living in Columbus, she met her husband, Dock Russell, who was stationed there serving in the United States Air Force. Before her husband retired from the military, they were stationed in many places such as England and France. Upon his retirement, they moved to Monroe, LA.

She is preceded in death by her husband, Dock Russell; parents, Floyd and Helen Michel; sister, Donna Edgington; and son, Jeffrey.

She will be remembered for her quick wit and her love for Ohio State Buckeyes.

Visitation will be at Mulhearn Memorial Park Mausoleum Chapel on Wednesday, December 11, 2019, at 1:00 P.M. with the service following immediately at 2:00 P.M. with Pastor Butch Pilcher officiating under the direction of Mulhearn Funeral Home, West Monroe.

In lieu of flowers, donations can be made in her name to any charity of choice.

The family would like to thank the staff at Landmark Nursing Home for the great care and love they gave Janet in her last few months.
To order memorial trees or send flowers to the family in memory of Janet Michel Russell, please visit our flower store.