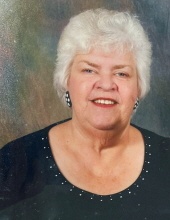 Jean Louise Warmuth Busby (83), a beloved wife, mother, grandmother, and great-grandmother entered His gates with thanksgiving in her heart on January 2, 2020, in Monroe, Louisiana.

Jean was born in Oregon City, Oregon on July 23, 1936. Jean was the baby of her family and enjoyed the idyllic childhood of the 1950’s. She graduated high school from St. Mary’s Academy, and then she proceeded to earn her cosmetology license. After cosmetology school, Jean met Jerry, the love of her life and a career Navy man. Jean and Jerry spent the next 20 years raising their seven children and moving across the world with the Navy, from Sasebo, Japan to Bremerton, Washington, to San Diego, California, to Shreveport, Louisiana. Jean dedicated much of her life to raising her children. She was a “neighborhood” mom, and her house was always open to bonus children and friends. Jean made fond memories with her children and instilled values of hard work, determination, and a way to find some humor.

No matter where Jean found herself, she found a way to dedicate her time to serve her community and her church. A devout Catholic, Jean sang in church choirs, led youth choirs and CYO youth groups, and served as a Reader and a Eucharistic Minister. Jean found her passion in serving Communion to those unable to attend Mass. She served in this manner up until the last few years of her life when her own health issues limited her. Even then, it was apparent that she would serve the church in any capacity. She created a “prayer box” ministry, where church members could leave prayer requests, and Jean would pray nightly when her own sleep came difficult.

Jean found ways to serve the community outside the church as well. She went back to school later in life, after her children were grown, and obtained the necessary training to be a Drug and Alcohol Rehab Counselor. She devoted her work to mothers trying to reach sobriety. This line of work brought her joy and a deep sense of purpose. She received a national award for a treatment program that she had developed. Jean worked in the rehab field until her retirement at the age of 62.

Jean and Jerry made the most out of retirement. Aside from her church and family, Jean loved adventure most. Traveling across the United States in their fifth wheel, Jean and Jerry crossed the country multiple times seeing friends and family along the way and enjoying their time. Ultimately, her love of the ocean and sunshine won out, and Jean and Jerry resided in Florida for over the last 15 years. Jean’s slice of heaven on earth was Ormond Beach. No matter how she felt, the beach was where she would want to be. Spending time with her kids and grandkids at the beach, were some of the highlights of her life.

Memorial Services for Jean Louise Warmuth Busby will be held at 11:00 AM Wednesday, January 8, 2020, in the chapel of Mulhearn Funeral Home, Sterlington Road with Deacon Scott Brandle officiating. A graveside service will be held 10:00 AM Thursday, at the Northeast Louisiana Veteran’s Cemetery, Rayville, LA, under the direction of Mulhearn Funeral Home, Sterlington Road. Visitation will be held from 9:00 AM until service time Wednesday, at the funeral home.

In lieu of flowers, memorial contributions may be made in memory of Jean Louise Busby to St. Jude Research Hospital.

Jean was loved, cherished, revered, full of life, and a whole lot of fun. She will be greatly missed. “Enter into His gates with thanksgiving, and into His courts with praise. Be thankful to Him, and bless His name.” Psalm 100:4.