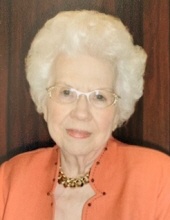 Jessie Smith Tate, 98, passed away peacefully on Wednesday, October 17, 2019, at Provision Assisted Living in Hattiesburg, MS. She was born on March 9, 1921, the seventh of nine children, to Luther Preston and Mallie (Brown) Smith in Progress, MS.

After graduating from Progress High School in 1939, she attended business school in New Orleans, LA. In 1942, Jessie married J.P. Tate (Jay) who was serving in the Army-Air Force during World War II. They were married for 53 years until his death. Jessie and J.P. moved to Monroe, LA in 1947, where J.P. was employed as a Monroe policeman. Jessie worked as a bookkeeper for Louisiana Gas Production, Monroe Pulpwood Company, and other businesses owned by S.J. Monroe for 20 years until her retirement.

After 70 years of living in Monroe/W. Monroe, she moved to Hattiesburg, MS to be near her brother Hugh and his family.

She is survived by her sister-in-law, Barbara Smith of Petal, MS and numerous nieces and nephews.

Jessie had no children of her own, but she leaves a legacy of faith in God, love, joy, hope and helpfulness to those who knew her and especially to members of her immediate family. She was loved by all who knew her.

The family would like to thank the staff of CHRISTUS St. Joseph's Home in Monroe, LA and Provision Assisted Living in Hattiesburg, MS for taking such good care of Jessie.

Memorials may be made to First United Methodist Church of West Monroe, LA.
To order memorial trees or send flowers to the family in memory of Jessie Smith Tate, please visit our flower store.