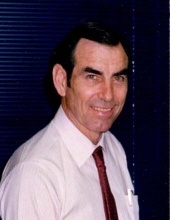 Funeral Services for Mr. Jimmy Donovan White, will be held at 4:00PM Tuesday, August 13, 2019, at Pleasant Hill Church, 601 Hwy 34, West Monroe, LA with Bro. Michael Sims officiating. Interment will follow in the church cemetery under the direction of Mulhearn Funeral Home, West Monroe.
Jimmy Donovan White, husband of Myrle Kilpatrick White, died at the age of 86 years, early Saturday morning August 10, 2019, in Baton Rouge, Louisiana. Jimmy and Myrle lived for decades in Ouachita Parish, in West Monroe, in the Woodlawn community, and in Sterlington. Jimmy served as basketball coach and principal at Sterlington High school in the 60s and 70s; notable accomplishments include helping to facilitate the merger of Myles High School and Sterlington High School during the “de-segregation” era and coaching a remarkably talented team to a 34-1 record in 1966. Jimmy and Myrle have four children: Rebecca “Becky” Elaine White of Baton Rouge, who has a daughter Chelsea; Gary Dane White of Arlington, Virginia, who is married to Susan Colvin White, with children Phoebe (married to Kelly Inviere) and Toby; Jimmy “Van” Donovan White, Jr., of Colfax, who is married to Laureli McDonald White; and Kyle Kilpatrick White of New Orleans.
Jimmy was the oldest child of Cleburne and Dell White, and has a brother Steve in Texas; he was preceded in death by siblings Dave (“Bud”) White and Jo Ann White Detroit. After a notable career as a 4-yr basketball and volleyball starter at Okaloosa High School, he enlisted in the Navy in 1950, just as the Korean War ended. He and Myrle married just after he finished his time in the Navy, having completed stints in Hawaii and San Diego.
After the Navy, Jimmy leveraged the GI Bill and graduated from Louisiana Tech University, eventually becoming an inspiring teacher of mathematics, chemistry and physics at Sterlington High School. He was a devoted advocate of the learn-by-doing school. One story from his coaching days follows:
At practice one day, he handed each player a pair of sunglasses frames with the lenses removed. Next, he gave each player a pair of cardboard rectangles that just fit into the bottom half of the frames, but left the upper half unobstructed. “What are we gonna do with these, coach?” the players asked. Coach White replied, “You’ll see…slip those rectangles into the bottom half of your frames and secure them with this duct tape”. In a few minutes those boys were all zippin’ up and down the gym floor with those cardboard sunglasses frames on, learning how to dribble without looking at the ball.
Visitation will be held from 5:00PM until 8:00PM Monday, August 12, 2019, at Pleasant Hill Church, 601 Hwy 34, West Monroe, LA.
Online Registry/Condolences: www.mulhearnfuneralhome.com
Mulhearn Funeral Home
West Monroe, Louisiana
To order memorial trees or send flowers to the family in memory of Jimmy Donovan White, please visit our flower store.