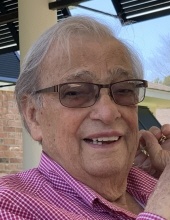 Leonard L. Colvin was born in Unionville, Louisiana on March 3, 1930; he was reunited with his wife, Eva on January 24, 2020. He would have been 90 years old in March.
Leon married his High School sweetheart Eva M. Roberson on June 2, 1951. They eventually made their home in West Monroe where they raised their son, Micheal.

Leon was a member of the United States National Guard. He worked for South Central Bell in Monroe, LA for 42 years and 8 months. He was a member of the West Monroe Masonic Lodge # 419 for 50 years. He enjoyed his home and his yard; was a craftsman and enjoyed woodworking.

He is survived by his brothers, Bobby A. Colvin (Linda) and Jimmy Rex Colvin (Dee) of Unionville, LA; his son, Micheal Colvin (Melanie); his grandsons, Garrett Micheal Colvin (Danielle) and Matthew Cox Colvin; great-grandsons, CJ and Bentley Colvin, all of West Monroe, LA.

Visitation will be held from 4:00 P.M. until 6:00 P.M. Monday January 27, 2020 at Mulhearn Funeral Home in West Monroe, LA. Graveside services will be held at 2:00 P.M. Tuesday January 28, 2020 at Fellowship Baptist Church Cemetery near Dubach, LA with Rev. Ricky Baker officiating.

His family extends our thanks to the most professional and compassionate staff at Landmark Nursing and Rehabilitation Center. The Lagniappe Physical Therapy Department at Landmark were so very special to him. Hospice Nurse Natalie Ward and Chaplain Ricky Baker of Louisiana Hospice and Palliative Care that cared and comforted him during his time at Landmark. His roommate, Clint Williams became a valued friend to him. We are most thankful to all who visited and loved him.

His family requests in lieu of flowers, a donation to Pilots for Patients, or a charity of your choice.