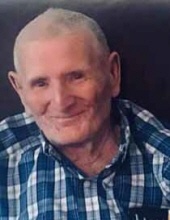 Funeral Services Celebrating the Life of Mr. Lovie Ezell, 87, of Gilbert, LA will be held at 2:00 P.M. Sunday, October 6, 2019 at the Calvary Baptist Church in Gilbert, LA with Rev. Rex Barker and Rev. Bobby Ensminger officiating. Interment will follow in the South Central Baptist Church Cemetery under the direction of Mulhearn Funeral Home Winnsboro, LA.

Mr. Ezell was born on February 2, 1932 in Gilbert, LA and passed away on October 3, 2019 at his residence surrounded by his family. He served in the United States Air Force during Korean War. Mr. Ezell was a member of Calvary Baptist Church in Gilbert, LA. He drove a motor grader for the state and parish for many years. Mr. Ezell loved fishing, riding is his golf cart with his special pet, Jasmine and playing dice with his family. He is preceded in death by his parents, James and Emma Foy Ezell; two sisters, one brother; and great granddaughter, Ellen Grace Ezell.

Visitation will be held from 4:00 P.M. until 8:00 P.M. on Saturday, October 5, 2019 at Calvary Baptist Church.
To order memorial trees or send flowers to the family in memory of Lovie Ezell, please visit our flower store.