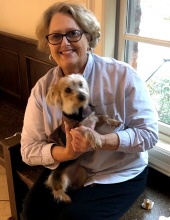 Every now and then someone is born who is a light in the darkness; such was Mary Sybil Rhorer Lefebvre who entered the world on October 6, 1950, in Plaquemine, Louisiana, and went to her Heavenly home on March 4, 2022. Sybil brought with her a glimpse of God’s pure goodness. Adorned with beautiful blonde curls; big, expressive brown eyes; and an endearing smile, she was the baby of the family—immediate and extended, and of the neighborhood. She was everyone’s baby; she was everyone’s hope and joy.

As she grew older, she charmed everyone she met with her positive attitude and incredible kindness. Not only did she charm people, but she charmed animals as well. In essence, she could literally “talk to the animals.” Instinctively she knew what an animal needed, and she loved all animals especially elephants. Her affection for these majestic creatures began when she visited Shirley at the Monroe Zoo, and this visit led to her passion for rescuing animals, particularly elephants. For years, she followed Shirley’s story, and her efforts culminated in a week-long trip to Hohenwald, TN, where she and her children fed and cared for Shirley who was able to roam freely at this animal sanctuary. The trip she planned to Africa in 2018 provided her with more opportunities to see, learn, and be among the elephants.

Having graduated from Plaquemine High School in 1968, where she was a school favorite and President of her Senior Class, Sybil entered LSU as a Secondary Education major. In 1970, she married the love of her life, Rick; and they headed to Auburn, Alabama, where he studied to become a Doctor of Veterinary Medicine. She was his constant support, and he credits her with having helped him achieve his degree and his many accomplishments. Upon return to Louisiana, Rick and Sybil settled in Monroe where she enrolled in NLU (now ULM) and was awarded her B. S. in Secondary Education. Eventually, she taught at River Oaks and loved her students. When her son, Richard, and her daughter, Lauren Magdalen (LM), were born, she became a stay-at-home mom devoting her time to rearing her two children. Once the children departed for the university, Sybil began her career as a realtor with John Rea Realty. Later she used her organizational skills as the successful Business Manager of Lefebvre Veterinary Medical Center. Additionally, as a woman adept at project management and completion, she served as a productive member of Phi Mu Sorority and as an active member and eventually as a sustainer in the Junior League of Monroe.

Sybil is preceded in death by her beloved parents, Magdalen and John Milton Rhorer; her paternal grandmother and namesake, Sybil Mary Marionneaux Rhorer Brown; her beloved in-laws, Joy and Eddie Lefebvre, Sr.; and numerous family pets including Gretchen, Marvel, Moby, Carly Simon, Bingo, and Stoney the Cat, just to name a few. When Carly Simon became blind having lost both eyes to disease, Sybil placed her in a baby’s sling and carried her around all day. She explored what diet this tiny dog could eat and hand fed her every meal.

The family requests that memorials be made to The Elephant Sanctuary in Hohenwald, Tennessee, or to St. Jude Children’s Hospital.

To order memorial trees or send flowers to the family in memory of Mary Sybil Lefebvre, please visit our flower store.