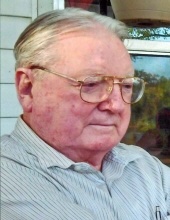 Funeral Services for Mr. Richard L. Garland, 95, of West Monroe, LA, will be held at 2:00 P.M., Sunday, March 20, 2022, at Community Baptist Church in West Monroe, LA, with Rev. Danny McIlveene officiating. Interment will be in Roselawn Memorial Gardens Cemetery in Calhoun, LA, under the direction of Mulhearn Funeral Home in West Monroe. Visitation will be held from 1:00 P.M. until service time on Sunday at the church.

Mr. Garland was born November 2, 1926 and passed away March 18, 2022. He served in the United States Army with the 7th infantry division and had his pilot’s license. Mr. Garland loved to fish, quail hunting and taking road trips. He also ministered at LTI and Angola.

He was preceded in death by his wife, Irene Garland; parents, Leo and Sarah Garland; son, Stephen Theodos; and great granddaughter, Sarah Theodos.

To order memorial trees or send flowers to the family in memory of Richard L. Garland, please visit our flower store.