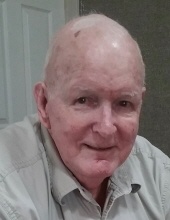 He is preceded in death by his parents, Fred Lee and Bessie Hibbard Campbell, and his wife of 61 years, Elaine Beach Campbell.

He married the love of his life Elaine on December 22, 1955 and made their home in Monroe, LA. They celebrated 61 years of marriage just prior to her death on January 16, 2017.

Our daddy was a wonderful family man and will truly be missed by all. He was a loving and caring husband to our mother. He became a devoted caregiver for 29 years after she became seriously ill at the age of 51, just days after he retired. He was an amazing, loving father to their two daughters. He and Elaine spent their entire lives raising their daughters and taking care of their parents in their elderly years. They had numerous obstacles and hardships in their lives but believed in God to see them through.

Richard was a member of Asbury United Methodist Church in West Monroe.

Richard, also known as “Peck” or “Red” by some, retired from the Monroe Fire Department in the rank of District Chief in 1988, after 32 years of service.

He was active in the Army National Guards, as a Sergeant where he served at Fort Chaffee in Fort Smith, AR during the Cuban Missile Crisis in 1961 - 1962. He was an avid hunter and fisherman until mother got sick. He was unable to continue and stayed home and cared for her as well as his elderly father.

He began repairing and wrapped fishing rods, as well as made homemade spinner baits up until he developed Parkinson’s Disease and Dementia. Richard loved the interaction with people, who would drop by for a visit or have a fishing rod to be repaired. He had quite a collection of old fishing lures which he loved to show to others.

In his early years he played fast pitch soft ball and was known as one of the best pitchers in the State of Louisiana.

When their first grandson, Tyler was about 8 weeks old, he wanted to baby sit. It was only 2 to 3 days a week but they loved every minute of it. When, 2 years later Jonny came along, they would keep them both. He always said that he would keep both or neither. When Tina and Bo married, Connor was 12 years old and they loved him as much as Tyler and Jonny. They told everyone that they had 3 grandsons.

The family would like to extend a special thanks to caregivers and friends, Connie Culpepper, Betty Kennedy and the entire staff at Stoneybrook Alzheimer Assisted Living for your genuine care and love for our daddy. We would also like to thank Amanda “Mandy” Waggoner, Cindy Smith, Tamiko Smith and Bro. Joe Rosales of Ascend Hospice for your genuine care and concern for daddy.