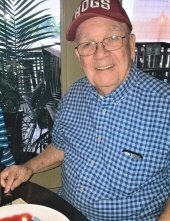 Funeral services for Richard Troy Reeves, 81, of Monroe, LA, will be held at 11:00 AM, Thursday, January 9, 2020, at Eudora Baptist Church in Eudora, AR, with Rev. Jimmy Wallace and Reggie McDaniel officiating. Interment will follow at 2:30 PM, Graveside at Mulhearn Memorial Park, Monroe, LA. Visitation will be from 10:00 AM until 11:00 AM at the church.

Mr. Reeves was born August 4, 1938, in Clarks, Louisiana, and passed away Monday, January 6, 2020, at Ridgecrest Community Care Center of a lengthy illness. Mr. Reeves is a veteran and served in the Army. He was a self-employed grocery merchant and later worked for Harps Grocery. He was a member of the Masonic Lodge, Lion’s Club, and of the Eudora Baptist Church. Friends say he had a BIG ole personality that arrived in a room sometimes WAY before he did.

Memorials may be made to Eudora Baptist Church and the American Cancer Society.