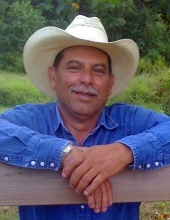 Mr. Roberts was born June 18, 1958, in Monroe, LA, and passed away April 7, 2022, at his home in West Monroe, LA. He was an avid deer hunter, who enjoyed weekends at the camp with friends and family. Robby loved to cook his special bambie bites, crawfish, and anything that would put a smile on everyone’s face. Riding horses has always been a big part of his life. He and his friends even started Trailriders, Inc. in the early 80’s. In his most recent years, Robby loved working in his garden that he shared with family and friends.

He worked for Brown Paper Mill, St. Francis Medical Center, Jackson Parish Hospital, Homeland Security, and Vanguard. During these employments, he had gained a lot of friends.

He was the backbone of our family, and we will miss him dearly every day.

Visitation will be held from 5:00 P.M. until 7:00 P.M., Monday, April 11, 2022, at Mulhearn Funeral Home in West Monroe, LA.
To order memorial trees or send flowers to the family in memory of Robert Ray "Robby" Roberts, Jr., please visit our flower store.