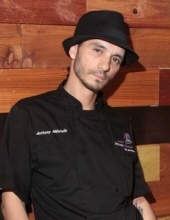 Graveside services for Chef Anthony Miletello, 40, of Monroe, LA, will be held at 2:00 P.M., Monday, May 13, 2019, at Mulhearn Memorial Park Cemetery in Monroe, LA, with Rev. Ron Vollmer and Rev. Job Edathinatt officiating, under the direction of Mulhearn Funeral Home.

He trained in New Orleans to be a Chef and brought his talents to the Monroe area serving at several restaurants.

Anthony was a loyal, dedicated, and loving father and friend. His spirit and lust for life through either food, music, the Saints, or his family was infectious and will be greatly missed, never forgotten. He was a man of many accomplishments. His most prideful was being a father and the other was sharing his love through food. He has been decorated time and time again during his career as a chef.

The family will receive friends after the service Monday at 6500 Millhaven Rd. Monroe, LA from 3:00 P.M. until 6:00 P.M.
To order memorial trees or send flowers to the family in memory of Ronald Anthony Miletello, please visit our flower store.