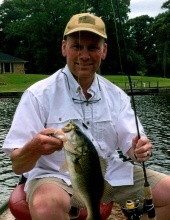 Shane was born September 20, 1971 and went to be with his Lord and Savior December 28, 2019. He was reunited in heaven with his father, Dr. Robert Edward Harvey and mother, Virginia Watson Harvey. Shane had a BA in Criminal Justice and proudly served as a Ouachita Parish Sheriff Deputy. Shane enjoyed hunting, fishing, golfing and spending time with family and friends.

Honorary Pallbearers will be any friends of Shane and brothers in Christ.

Donations can be made to Shane’s favorite charity Pilots for Patients.