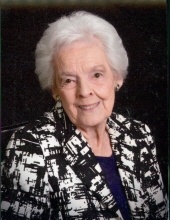 Mrs. Leigh was born August 2, 1924 in Grangeville, LA and went to be with her Lord and Savior on January 24, 2020. She graduated from Greensburg High School in 1941. She was a member of St. Paul’s United Methodist Church and United Methodist Women. Syble was a loving wife and mother, who was devoted to her family, friends, and church. She volunteered as a pink lady at St. Francis Hospital for over 30 years, which she thoroughly enjoyed. In 1990, Syble was named Woman of the Year for the United Methodist Women. She leaves behind her precious four-legged baby, Little Bit, whom she adored.

The family would like to extend their many thanks of gratitude to Dr. Kerry Anders, Louisiana Hospice, Christy Long, Jean Eddington, and all the doctors, nurses, and staff who cared for her on the Sixth-Floor Orthopedic wing at St. Francis Medical Center for their loving and compassionate care of our mother.

Memorials may be made to St. Paul’s United Methodist Church, the Ouachita Parish Humane Society or the charity of your choice.
To order memorial trees or send flowers to the family in memory of Syble Leigh, please visit our flower store.