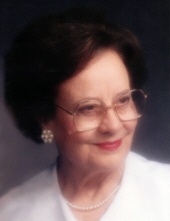 Verna Lee Stover Angel was born March 2, 1925 in England, Arkansas and she died in Monroe, Louisiana on March 3, 2019 at the age of 94. A memorial service will be held on March 23, 2019 at 11 a.m. at Westminster Presbyterian Church in Hot Springs, Arkansas where she will also be interred in the columbarium.

She was born in England, Arkansas and was raised in Hot Springs, Arkansas. Like both of her parents, Lee learned to fly. On completion of her first solo flight, her father had his mechanic remove the wooden propeller as a symbol of the event. It is still displayed today. Graduating from Hot Springs High, she attended Texas Women's College in Denton, TX. After college, Lee obtained her commercial pilot's license and worked for her father, John Stover, at Stover Aviation in all aspects of business. In those days, her nickname was Smokey. She met her future husband, Paul, when he came to Hot Springs to work as both mechanic and pilot for her father. Both would go on to work for Chicago and Southern (which merged into Delta Airlines), Lee as a ticket agent and Paul as a pilot. Through the years they lived in Memphis, Houston, New Orleans, Dallas, and Atlanta before retiring back to Hot Springs.

Lee was very proud to be part of a flying legacy. The four generations include her mother, father, husband, son, daughter, grandson, and granddaughter.

She went on to be a consummate hostess, entertaining family and friends wherever she lived. Lee loved serving others, especially her grandchildren. Although they traveled the world, Lee and Paul were happiest upon returning to their home, Mosswood, on Lake Hamilton.

She was preceded in death by her husband, Paul Angel; and her parents, John Stover and Emily Mae Stover Offenstein.

The family would like to extend warm thanks to all of the wonderful employees at The Oaks' Eden Place and Ascend Hospice.

In lieu of flowers, the family requests memorials are made to the Alzheimer's Association or P.E.O. Educational Loan Fund, https://donations.peointernational.org/ Specify Chapter BJ in Arkansas.