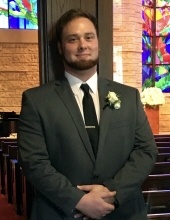 Aaron Michael Nelson, 26, of Monroe, Louisiana, passed away Thursday, September 9, 2021. He was a devoted husband and father, son and brother, and a friend to many. Growing up, Aaron was active in the youth group at First United Methodist Church, West Monroe and attended Neville High School. As an adult, he was a faithful member of New Destiny Assembly of God and served his church family in the technology and sound booth, playing drums with the praise team, and as a part of the men’s ministry. He went out of his way to help however he could, whether it was for a family member, a friend, or someone he just met. He enjoyed technology and video games, often streaming and sharing his love of gaming with a large online community. Aaron never met a stranger and will be remembered for his big heart, his sense of humor, his passion for life, and his Christian testimony. He struggled with addiction in his early adult life and finding faith in Christ was a turning point for him. He was charismatic and outgoing, sharing his faith and testimony with many, many people over the course of his life. Aaron and his wife Audrey were married in February of 2019 and welcomed baby Joseph in August of 2020. Aaron was a proud father and took his fatherly role seriously. He was always ready with a “dad joke”, a funny meme or video, or a comical story to share.

Aaron was preceded in death by his grandparents, Bob & Frances Nelson and James & Lila Patterson, and his cousin, Kati McGuire.

The family is grateful for the compassionate care that he received from the dedicated doctors and nurses at the St. Francis Medical Center SICU, as well as the many prayers and words of encouragement that we received from around the world. We cherish the stories his friends share of the many ways Aaron touched their lives.

In lieu of flowers, memorials may be sent to New Destiny Assembly of God.
To order memorial trees or send flowers to the family in memory of Aaron Michael Nelson, please visit our flower store.