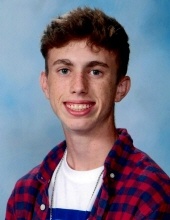 Alex was a spirited and selfless child who did all that he could to make sure that those closest to him were happy. He was a good teenager that grew into an amazing young man, and he tried his best to impact the lives of those around him positively in his own unique ways.

Alex attended West Ouachita High School. He played soccer throughout middle school and high school, and he enjoyed every moment he had on and off the field with his friends and teammates. He was on the drumline with the marching band throughout high school, and he spent many afternoons practicing to perfect his talent.

Funeral Services will be held at 10:00 A.M. on Tuesday, June 7, 2022, in the chapel of Mulhearn Funeral Home in West Monroe, LA, with Scott Alexander officiating. Interment will follow in Kilpatrick’s Serenity Gardens Cemetery in West Monroe. Visitation will be held from 9:00 A.M. until service time on Tuesday at Mulhearn Funeral Home, West Monroe.
To order memorial trees or send flowers to the family in memory of Alexander "Alex" Little, please visit our flower store.