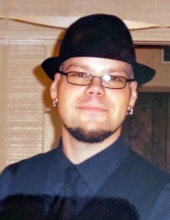 Andy was born on May 15, 1979, in Bellflower, CA and passed away in West Monroe, LA, on October 3, 2021. He attended Christian School and was Valedictorian of his class. Andy attended 2 years of college at the Otis College of Arts and Design and then worked for Lowe’s in 2001. He eventually went to work as a fry cook with Copeland’s of New Orleans, where he worked his way to Chef and number 2 Manager. Andy was then transferred to Sage Bar and Restaurant as number 1 Manager until the owner decided to close. He then started to work for The Fat Pelican.

Andy was a person that believed in doing his best at what he was doing. He loved working or relaxing with puzzles or cooking with his mother, entertaining his two daughters, Julian and Lily, or just being friendly to everyone.

Andy is preceded in death by his brother, Terry W. Whitaker.

Visitation will be held from 2:00 P.M. until 5:00 P.M. Friday, October 8, 2021, at Mulhearn Funeral Home in West Monroe, LA.
To order memorial trees or send flowers to the family in memory of Andrew "Andy" Whitaker, please visit our flower store.