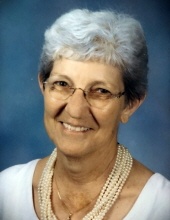 Ann Elizabeth Cox Fritsche passed away on April 15, 2022. She was born on October 14, 1939 in St. Louis to Ann and James Cox. She had three brothers and two sisters (George, Mike, Tim, Margie and Helen). Married to Dick Fritsche on June 13, 1959 in St. Louis, they were together for almost forty-nine years until his passing in 2007, and had two sons, Tom (Robin) and Michael (Leng); two grandchildren, Ann (Sree) and Tom; and two great-grandchildren, Ari and Rania. She is survived by her older sister, Helen.

For her, just about every moment in life was related to or could be made into a song. She often used a tune as a simple memory device to help students imprint a concept that might otherwise escape them. No matter what, life just seemed to be a little easier if she was singing.

When she wasn’t singing, she could be found teaching math, solving crossword puzzles, knitting, sewing, crocheting, cross-stitching, quilting and even painting to create thousands of items, mostly given as gifts, that are a treasured memory to all those that received them.

To count the number of people whose lives were touched and influenced by Mom a/k/a Ms. Fritsche a/k/a Nancy a/k/a Nana might be like trying to count the stars in the sky. Most remember her as a teacher, sharing lessons in and out of the classroom, but to many of us, she was much more than that. She had a special way of making each person feel important, that they mattered. She had more faith in us than we did in ourselves. She knew we could do it, no matter how difficult things seemed. But however important she was to each of us, all of her “kids” were special to her and she was proud of each and every one. She could make you smile when you were sad or laugh when you were scared, and anyone who knew her will remember her that way.

A memorial celebration of her life will be planned for later this year, probably in October which is the month of her birthday. Please stay tuned for more details.

For those wishing to honor Nancy’s memory, please consider, in lieu of flowers, offering a memorial donation to Nancy Fritsche STEM Teaching Endowment at St. Frederick High School or another charity of your choice.

To order memorial trees or send flowers to the family in memory of Ann Elizabeth Cox Fritsche, please visit our flower store.