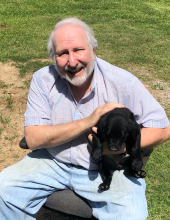 Anthony (Nino) Michael Danna passed away at home from a sudden cardiac event on Sunday, June 6, 2021, at the young age of 73.

From a young age Tony was a disciplined and hard worker with goals in mind he always achieved. At age 12 he delivered newspapers for the "Monroe Morning World" on his bicycle. At that time, it involved rolling all the papers, putting rubber bands on them, getting them in a cloth pouch, and peddling the neighborhood to get them to homes on time. Then each month he had to go to each home to collect the monthly fee. They would remark to our mother how courteous he was when doing his collections. Later in high school he worked as a bag boy at A&P.

Around this time Tony taught himself to play drums and became an excellent player in high school. He earned the money to buy a professional set.

A year after being graduated from St. Frederick High School, Tony volunteered for the Navy during the Vietnam War. He was sent to the Navy Electronics School in Memphis, TN and spent his Naval career at Naval Air Station Oceana in Virginia Beach, VA, working on the radar electronics of military jets.

After his Navy stint, Tony used his G.I. Bill to return to Monroe and enrolled in the Pharmacy program at NLU, now ULM. After graduation he worked at hospitals in Lake Charles, LA, then Crowley, then Bastrop, and lastly in Monroe. Tony worked for 23 years at St. Francis Medical Center Pharmacy and spent the past 2 years in retirement.

Tony had an aptitude for mechanics and electronics. In the heyday of Pac Man, Galaga, and Donkey Kong, Tony opened a Video Game Arcade and filled it with the popular machines. When they needed repairs, he read a schematic and did it himself.

“Tony was very dedicated to St Michael the Archangel. He always wore the medal around his neck. Every morning he would pray to St Michael and his lab would sit and look up at him and listen intently. “

Tony had a great affection for his dogs, and spoke of them often. Less than a month before his death, he brought home a sweet black lab puppy. He was so happy with Baby Sugie Bear, and she helped ease the pain he had been feeling after his latest lab died in November.

A funeral mass will be on Friday, June 11, 2021, at St. Matthews Catholic Church at 121 Jackson St, Monroe, LA at 10:00 AM. This will be followed by a blessing service at the chapel of St. Matthews Church Mausoleum on Washington St. The church prefers masks be worn inside. Family will meet guests afterward.

You can tell a lot about a person from how they treat animals, and Nino treated them well. His squirrels in his yard would run down the tall oaks to him whenever he stepped outside. They knew he would feed them shelled pecans. They came very close to him and trusted him. Oh how he also loved squirrels!

We will miss his jokes, his hearty laugh, and his stories.

See you on the other side!
To order memorial trees or send flowers to the family in memory of Anthony 'Nino" Michael Danna, please visit our flower store.