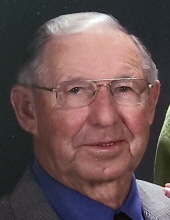 Funeral services for Mr. Bobby Thomas “Bob” Hinton, 93, of Monroe, LA will be held at 2:00 P.M. Wednesday, April 20, 2022, at Mulhearn Memorial Park Mausoleum Chapel with Dr. Alan Miller officiating. Interment will be in the Mausoleum under the direction of Mulhearn Funeral Home Sterlington Rd., Monroe, LA.

Bob was born in Calhoun, LA on January 1, 1929 and passed away on April 15, 2022 at home after a lengthy illness.
He was preceded in death by his parents, Herbie E. Hinton, Sr. and Annie Belle Brakefield Hinton; his wife of 64 years, Jeanette Dorman Hinton; and two brothers and five sisters. He was the last living sibling.

Bob was a founding member of Southside Baptist Church in Monroe, LA. He was currently a long-time member of First Baptist Church of Monroe where he served many years as a Deacon and Sunday School director.

Bob came from humble beginnings, and he never lost sight of that fact. He loved the Lord and always gave credit to his Savior for all of the blessings that he received. He had a tremendous work ethic.

Bob opened Hinton Sign Company in 1960 and ran a very successful business until age 87 when his health forced him to retire.

In 1974, Bob earned his private pilot’s license. He loved the adventure that came with flying.

Bob was an avid duck hunter and golfer.

The family would like to extend a special thank you to Dr. David Barnes, Ascend Hospice staff and his CNA, Netta Shaw, for her gentle, loving care of our dad and granddad.

Visitation will be from 1:00 P.M. until service time at Mulhearn Memorial Park Mausoleum Chapel in Monroe, LA.

Memorials may be made to the First Baptist Church Forward in Faith Building Fund, 201 St. John St., Monroe, LA 71201 or the charity of your choice.

To order memorial trees or send flowers to the family in memory of Bobby "Bob" Thomas Hinton, please visit our flower store.