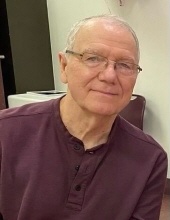 Bobby Haisty grew up in Bawcomville with his brothers and hard-working single mom. He and his brothers could probably be found getting into some kind of trouble somewhere. Then Bobby met Barbara.

Bobby fell in love with Barbara in the third grade. Thus, began the story that would forever change the lives of all who came in contact with Bobby. The two married and grew their family to three sons (in heaven) and three daughters. Bobby’s life was marked with duty during war and loss of sons, but he clung to his wife. Bobby always told the story of how he fell in love with Barbara and how Jesus had changed his life. He loved his wife, daughters, grandchildren, and family well. Bobby exemplified an imperfect person willing to let a perfect God transform his life. If you knew Bobby, you loved him. He made everyone better. One of his favorite things to do was spend time with his family whether it was vacations, hunting, or just celebrating a holiday or birthday. He was devoted to Family Church and loved his small group.

The family would like to say a special thanks to the SICU nurses at St. Francis hospital that took such good care of Bobby.
To order memorial trees or send flowers to the family in memory of Bobby Glenn Haisty, please visit our flower store.