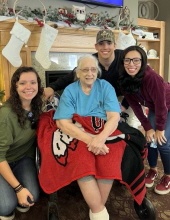 Funeral service for Mrs. Carolyn Braswell, 87, of Monroe, LA, will be held at 2:00 P.M. Friday, March 25, 2022, in the chapel of Mulhearn Memorial Park Mausoleum with Rev. Brother Michael Ward officiating. Interment will follow at Mulhearn Memorial Park Cemetery under the direction of Mulhearn Funeral Home Sterlington Rd. Monroe. Visitation will be from 12:00 P.M. until service time at the mausoleum.

Mrs. Braswell was born on July 26, 1934, in Vardaman, MS and passed away on March 22, 2022, in Monroe. She was a member of Jesus the Good Shepherd Catholic Church, where she was the secretary for over 25 years. Later she worked at James W. Braswell and Associates before her retirement. Mrs. Braswell was preceded in death by her husband, James Braswell; her parents, Herbert and Clyte Strain; her grandson, Harrison Braswell; and her aunt, Cubelle Young.

Memorials may be made to Jesus the Good Shepherd Catholic Church.

To order memorial trees or send flowers to the family in memory of Carolyn Braswell, please visit our flower store.