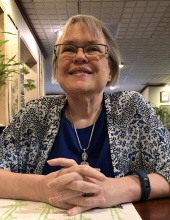 Funeral services for Mrs. Cindy Fomby Dickinson, 59, of Cordova, TN, will be held at 11:00 A.M. Thursday, November 18, 2021, at Mulhearn Memorial Park Cemetery Mausoleum Chapel with Rev. William L. Smith officiating. Interment will follow in Mulhearn Memorial Park Cemetery under the direction of Mulhearn Funeral Home Sterlington Rd., Monroe, LA. Visitation will be held from 10:00 A.M. until time of service at the mausoleum chapel.

Cindy was one of the early females to enter the Computer Science curriculum at then Northeast Louisiana University. One day, a remarkably unimpressive Dennis Dickinson came up to her great friend Linda and asked what he had missed in French class. He gave each of them a Wint-O-Green Lifesaver...and after he walked away, Cindy leaned close to her friend and asked "Is it safe to eat this candy?". 5 or so years later, Dennis and Cindy married.

When Dennis took her to meet his grandmother Blanche, they found her working on a quilt. Cindy was fascinated, took up quilting, and became a master piecer and quilter.

After college, Cindy attended Oklahoma State University, taking a Master's in pure math. After finishing her class work, she married and moved to Arlington TX. She finished her thesis on the relationship between prime numbers and Riemann zeta function while instructing Math at University of Texas at Arlington.

In the late 1990s, she created Pinkpaw & Company, publishing quilt patterns, dyeing fabric, and quilting quilts for herself and eventually the quilting publishing industry, as well as for individual artists and crafters. Her quilting minion, Dennis, assisted.

Cindy helped moderate the largest quilt group on Facebook "Quilt along with Pat Sloan", and answered many, many piecing and quilting questions in person and on the web.

One day when Cindy was feeding a Giraffe at a wildlife sanctuary, an Ostrich reached through the opposite car window over her shoulder and stole the food! Cindy was a bit shocked.

Always keeping a trash bag in the back seat, Cindy forgot her MIL was back there and threw the trash in her MIL's lap! This became a tradition, and every time Dennis's mom rode with them, Cindy always tossed something at her. :)

As our good friend Pat Sloan said in her blog today "She savored life and celebrated even the smallest things. This is what I most want to emulate, her ability to make all the things count. Even the very small ones."

She is preceded in death by her father Robert L. Fomby and her nephew Nick Brady. She is survived by her mother, Lovie Price Fomby; sister, Linda Fomby Brady; husband, Dennis Dickinson; nephew, Ehrin Brady; and niece, Kristen Brady.

She will be missed by many around the world.
To order memorial trees or send flowers to the family in memory of Cindy Dickinson, please visit our flower store.