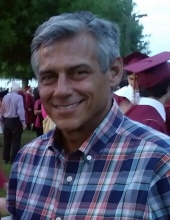 Services for David Alan Duncan, 51, of Metarie and formerly Monroe, will be held at 11:00 A.M. Wednesday, July 28, 2021, at Lakeshore Baptist Church, Monroe, La., with Brother William L. Smith officiating. Interment will be at the Duncan Cemetery in Mangham, La. Visitation will be held from 5:00 P.M. until 7:00 P.M. Tuesday, July 27, 2021, in the chapel of Mulhearn Funeral Home, Monroe, La.
David was born in Monroe on April 4, 1970 and passed from this life on July 22, 2021. He was preceded in death by his mother, Barbara Stuckey; grandparents, Claude and Elsie Duncan; grandfather, Jimmy Poole; and step-grandmother, Clara Poland. Survivors are the loves of his life, Tamra Mulla; her son, Mark Patrick Mulla; his father, Bennie Duncan and stepmother, Sharon; sister, Nichole Marie Duncan; brother, J. Chris Duncan; step-brother, Chris W. Jenkins and wife, Jessica; nephews, Benjamin and Mike Lofton, Mark Barlow, Bentley Jenkins; niece, Adilyn Jenkins; his grandmother Gladys McKamie; step-grandfather, Nick Poland, and the Mulla family; numerous aunts, uncles, cousins, and extended family; Mike A., Johnny E., Bernie H.’ and John D.; sponsors that made an impact and major difference in his life for years until his passing; and many friends.
David loved the Lord, his family, and the outdoors. He was a graduate of Ouachita High School, attended NLU/ULM and was a life member of Lakeshore Baptist Church. David was a hard-working man who enjoyed working with his mind and his hands. He could transform any wood into a thing of beauty. He was a friend to many, and everyone knew him as a kind-hearted person who always had a smile and good word for everyone he met. David was an extraordinary salesman with numerous accolades, most recently as the Million Dollar Salesman of the Year with Louisiana Pools & Spas in New Orleans.
Pallbearers are Chris Jenkins; cousins, Randall Thompson, Kenny Dale Duncan; friends, Nathan Hopkins, Capt. Jason McMilon, and Kevin St. Clair.
Honorary pallbearers are Mike A., Johnny E., Bernie H., and John D.
In lieu of flowers, memorials may be made to Lakeshore Baptist Church, Louisiana Right to Life or Life Choices of Monroe, Louisiana.
To order memorial trees or send flowers to the family in memory of David Alan Duncan, please visit our flower store.