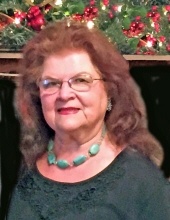 Funeral services celebrating the life of Dorothea R. McIntosh, 78, of Calhoun, LA, will be held at 2:00 P.M. Friday, January 28, 2022, in the chapel of Mulhearn Funeral Home in West Monroe, LA, with her family members conducting the service. Interment will be in Carlton Cemetery in Calhoun, LA.

Mrs. McIntosh passed away on January 23, 2022, at her residence after a sudden illness.

Mrs. McIntosh was born in New York City, New York and grew up in Short Hills, New Jersey. In her youth, she spent her summers at the beach in Delaware, where she made many long-lasting friends. Later, she attended Mary Washington College in Fredericksburg, VA, where she achieved a Bachelor of Fine Arts. During her studies, she would spend time in Washington DC and research artwork at their many museums. While there, she met her future husband, Floyd “Bud” McIntosh who was stationed at Fort Belvoir at the time. They married in Short Hills soon after Dorothea’s college graduation and eventually made their home in Calhoun, LA.

She enjoyed spending time with her children and grandchildren, nurturing her flowers, feeding her birds, reading novels, writing letters, and seeing a good movie. Also, she was an excellent cook. She raised several cats through the years, but Niki was always her favorite, so much, she did not have another one after him.

Visitation will be from 1:00 P.M. until service time on Friday at Mulhearn Funeral Home in West Monroe, LA.

Memorials may be made to the Wounded Warrior Project at www.woundedwarriorproject.org.
To order memorial trees or send flowers to the family in memory of Dorothea R. McIntosh, please visit our flower store.