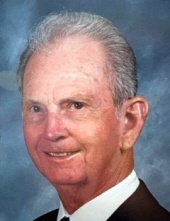 Dr. Hughes was born May 30, 1926, at the family home in Dodson, LA, and passed away Wednesday, February 2, 2022, at Northeast LA Veterans Home in Monroe, LA. He was 1/8 Native American Indian. His parent were Robert Walter and Ida Price Hughes. He accepted Christ at about 12 years of age and was baptized in the farm pond at his home. He enjoyed the farm life and all of the chores involved with it. Dr. Hughes played high school basketball and baseball. In 1942, he finished high school one night and turned 16 years old the next day; in those days there were only 11 years of school.

Willie came to Monroe in September of 1942 and enrolled in the Agricultural program at Northeast Junior College. After completing 2 years, he was awarded a certificate.

Willie volunteered for the U.S. Navy in May 1944 and served 25 months in the South Pacific on a cargo attachment ship. During his service, he visited Korea, the Solomon Islands, the Carolina Islands, Gilbert islands, the Philippines, Okinawa, Guam, Japan, Formosa, Hong Kong, and Shanghai in China.

Willie, “Bill”, was discharged from the Navy in 1946. He then came to Monroe and enrolled in Northeast Junior College in September 1946 in the Pre-Med curriculum. He received another 2 year certificate in 1948.

In October of 1949, he married Dawn Taylor of Farmerville, LA. His education continued when he enrolled at LSU and complete a bachelors’ and a masters’ degree in agricultural education in 1953. He taught high school for 7 years and was an original faculty member at West Monroe High School. After 7 years of teaching, he resigned and entered dental school in New Orleans in September of 1959. He graduated from dental school in May of 1963 and returned to Monroe practiced dentistry for 35 ½ years.

While in school in New Orleans, he taught a men’s bible class as a substitute teacher at First Baptist Church. He was ordained a Deacon in November of 1967 at College Place Baptist Church in Monroe, LA, and served as Chairman of Deacons for 3 consecutive years: 1973, 1974, and 1975. He taught a Sunday school class for 51 years for senior adult couples. During all those years of service, he served on every committee in the church. He joined North Monroe Baptist Church on August 10th of 2014.

In lieu of flowers, memorials may be made to North Monroe Baptist Church or your favorite charity.
To order memorial trees or send flowers to the family in memory of Dr. Willie "Bill" Monroe Hughes, please visit our flower store.