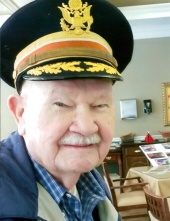 Dudley was born in West Monroe, LA, on October 18, 1929, and entered eternal rest on July 2, 2022, after a lengthy illness.
After graduating from Ouachita Parish High School, he entered the military. He served in three different branches, (Navy, Marines, Army) each offering different aircraft he wanted to fly. He flew prop, jet, and eventually attained the rotor (helicopter) ratings. He was an instructor and from what I understand, he was a tough but fair instructor. He flew in the Viet Nam and Korean wars and was instrumental in helping so many others.

During this time, he met the love of his life, Frances. They have two children, Don and Kim. After retirement from the Army as a Major, Dudley went to work for the Federal Aviation Administration as an Air Traffic Controller and weather briefer. He retired once again, but that didn’t last long. He volunteered with several agencies including West Monroe Police Department, Northeast Food Bank, Ouachita Parish Library and a few others. He belonged to several organizations, including being a 32nd degree Mason and Shriner with Barak Temple, Riverside Horseback Riding Club, Amateur Ham Radio Club, call sign K5YOH, and belonged to Calvary Baptist Church where he attended over 25 years.

In later years, Dudley enjoyed spending time with family and friends and loved playing Bingo at St. Joseph’s Continuing Care facility. You could find him sitting in the rocking chair, arms crossed, sunglasses and hot on. He would not say much, but he would just have that smirky smile.

A heartfelt thank you to St. Joseph’s Continuing Care staff and Premier Hospice for all the loving care they provided. Don and I would like to say a very special thank you to Rose and Jennifer who cared for Dudley over the past year. You made his life enjoyable up to the end.

Dudley is preceded in death by his parents, Julius and Zell Sanderson, and great grandson, Jonathan Gombala.

A memorial service will be held at Calvary Baptist Church immediately following church services on July 17, 2022, at 11:00 A.M.

In lieu of flowers, memorials may be made to the charitable organization of your choice.

To order memorial trees or send flowers to the family in memory of Dudley Bernard Sanderson, please visit our flower store.