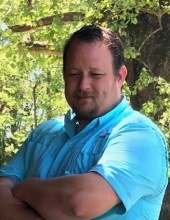 Funeral services celebrating the life of Dustin DeWayne Clement, 37, of West Monroe, LA will be held at 10:00 A.M., Friday, August 6, 2021, at Christ Church in West Monroe, LA, with Rev. Matt Brock officiating. Interment will follow in Start Cemetery under the direction of Mulhearn Funeral Home in West Monroe, LA.

Dustin was the business manager for Natchez Chrysler, Jeep, Dodge and Ram Automobile Dealership. He enjoyed spending time in the woods hunting and on the lake fishing. He attended ULM and enjoyed rooting for the Warhawks on Saturdays and was a loyal member of the Who Dat Nation with his New Orleans Saints.

He was preceded in death by his maternal grandfather, Ray Frey; and his paternal grandmother, Marie Clement.

In lieu of flowers, the family is asking for donations for funeral expenses and the remaining funds will be used for his
children's future and education.
To order memorial trees or send flowers to the family in memory of Dustin DeWayne Clement, please visit our flower store.