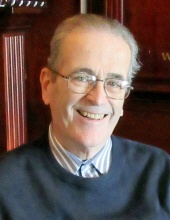 Edward J. O’Boyle, 84, died at home with his family by his side on July 4, 2022, after a brief illness. Ed was born to the late Daniel and Helen O’Boyle on July 13, 1937, in Chicago, Illinois. Being born during the Depression to Irish immigrants led to a lifetime of frugality that was constantly thwarted by his loving family. Gifted with a brilliant mind, Ed graduated from DePaul University with a B.A. in Economics and earned his Ph.D. in Economics at St. Louis University. Ed was an internationally recognized economist. He published over one hundred academic papers and presented his research all over the world. He believed in personalist economics, which is very complex but in part is based on the idea that work is more than producing a given good or service, it is an opportunity to be creative and to belong and thereby to realize more fully one's own potential as a person. When people are more fulfilled, society prospers. He also conducted in depth research to help maximize workplace innovation and organization. Ed was an active member of the Association for Social Economics since 1975, as well as a journal editor, peer-reviewer, and visiting professor in Poland, Ireland, and Italy among other places. He was awarded the Thomas Divine Award for lifetime contributions to social economics and the social economy in 2004.

In 1970, Ed met his wife of over 52 years in Washington, D.C. Meade and Ed were a force to be reckoned with as they campaigned for the rights of unborn children. They personally hosted many unwed mothers in their homes as these women awaited birth and adoptions. In 1977, they moved to Louisiana which was a bit of a culture shock for an academician from Chicago, but Ed was always up for new adventures. He began a 30-year professional career teaching Economics at Louisiana Tech University. He believed in the pursuit of perfection and was famous for allowing students to skip their final exam if they never, ever missed one question on the quiz he gave in each class meeting.

In raising four children with Meade and experiencing all the fun a big extended Louisiana family tends to have, Ed learned to enjoy the finer things in life-good food, great wine and whiskey, beautiful art, and travel. He did try to understand why the ladies in his family felt it was important to spend good money on pursuits involving horses and dogs, but ultimately, he learned to accept that these animals were part of his life. Most importantly, he loved to laugh and despite his intelligence, never took himself too seriously. Anyone who has met Ed will talk about the core values he never wavered from-kindness, generosity, and morality.

Ed is survived by his wife of over 52 years, Dr. Meade Phelps O’Boyle, his son Michael, his daughters Deirdre Hooper (Christian) of New Orleans, Ann Parker of West Monroe, and Meghan O’Boyle (Nathan Wiens) of West Monroe. He relished his role as Pops to Connor, Ethan, and Lily O’Boyle, Candice Jahnke, Gibbs, Katherine, and Eleonore Hooper, Luke Jones, Jonathan Parker, Graham and Patrick Moore, and Aubrey and Natalie Wiens. He was preceded in death by his sister Bernadette O’Boyle Zaker.

In lieu of flowers, please send donations to Life Choices Pregnancy Resource Center of Monroe or, in honor of Ed, just be really kind to someone without expecting anything in return.
To order memorial trees or send flowers to the family in memory of Edward John O'Boyle, please visit our flower store.